As statistics have shown, the number of students studying abroad has tripled over the last few decades and about 10 percent of all U.S. undergraduate students will study abroad by the time they graduate. In this blog series, we’ll provide some simple etiquette tips for popular study abroad destinations. 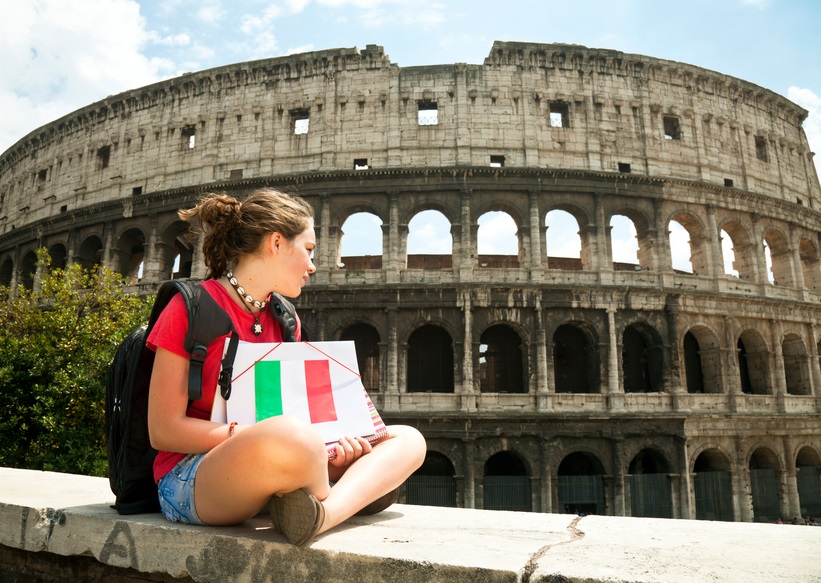 Along with the United Kingdom, Spain, China, and France, Italy was listed as one of the top study abroad destinations for Americans. Before your students head to the land of Da Vinci and Ovid, share the following tips to help them avoid common etiquette mistakes.

Greetings and Conversations
When studying abroad, students often choose a country they’re familiar with or a country where they can even speak a bit of the language. However, if you’re unfamiliar with Italian, learn a few key phrases before departing. English isn’t widely spoken outside major tourist areas in Italy, and it’s respectful if you attempt to speak even a few common phrases in Italian. Greeting and thanking others in their native language can go a long way. If you do speak Italian, be mindful of the fact that not everything will translate perfectly – this is especially important when it comes to jokes and humor. An innocent joke could be translated incorrectly and accidentally offend your new friends or host family. Also, be cautious of the hand gestures you use. They’re very common in Italy, but Americans should not use the okay symbol or make a circle with two hands as those gestures can be considered offensive.

Clothing
Italy has a reputation for being one of the top fashion capitals in the world, so it’s best to steer clear of wearing gym clothes, ripped jeans or over sized winter boots in public. When in doubt, dress modestly. Remember to always look polished and put together when traveling to Italy as the culture typically holds appearance to a high standard. Accessories and scarves are the easiest way for women to dress up any outfit, but avoid bringing anything too flashy or expensive as this is an easy way for criminals to target you. Italy is known for scams that target tourists, such as locals who approach you and ask for directions or foreigners offering to help find local destinations. As such, also avoid large American symbols, such as sports team logos, that could make you stand out from the crowd.

Dining
It is very important to be respectful of meal times in Italy. Meals are typically served much later in Italy as many Italians do not start their days with breakfast and tend to eat their first meal around 11AM. Most restaurants in Italy close between breakfast and lunch, so students should be aware of when cafes and restaurants are shutting down for their afternoon break (this will vary from restaurant to restaurant) and not overstay their welcome. Be sure to brush up on Italian dining etiquette to avoid any embarrassing faux pas. For example, bread is only served before or after dinner and not with the main part of the meal, and ordering coffee with your meal is considered highly unusual. Eating everything you’re given is considered polite, whereas leaving lots of food on your plate could offend. Typically only water or wine is served with dinner, and it is uncommon to ask for anything else to drink. Italians do not typically overindulge and being drunk in public is extremely frowned upon. It’s considered offensive to add seasoning to your food without at least trying it first. Unlike the hustle and bustle of America, meals are a time for Italians to relax, enjoy their food and spend time with loved ones. Restaurants may appear to be understaffed, but servers will not constantly check on you as they do in the United States. If you need something, be patient and flag down a server when appropriate. It’s also important to note that you must ask for your check when eating in a restaurant. Plan extra time for meals, and use that time to enjoy the culture and food. Keep in mind that it is not customary to tip in Italy, whether you’re in a restaurant or taking a taxi and it could even be considered rude.

Behavior
After a week or two in another country, you may start to fall into a routine. Remind yourself that you are still in a foreign country with different customs and a different culture than your own. For example, Italians enjoy taking things at their own pace and don’t always consider punctuality to be a priority. Students should remind themselves of this and be patient when in class, at a restaurant or even when meeting up with new friends. The LGBT community is vastly accepted in Italy, but as a visitor, it’s best to be modest and avoid public displays of affection. Unfortunately, American college students can have a reputation for being a bit loud and sometimes over the top. While this doesn’t apply to everyone, make sure you are not one of these students out of respect for your host country.

Need help educating your students before they travel abroad? Contact us today to learn more.