In an era where airplane seats are getting smaller and personal space is gold, it’s no secret air travel can be stressful at times (oh come on, don’t you love being trapped in a vessel the size of a preschool classroom with a bunch of strangers?). Sometimes so stressful we find ourselves reverting to old childhood behaviors like squabbling over arm rests, tattling on our seat mates or even intentionally kicking someone else’s seat. Has air travel left you too frazzled to pack your best manners? Have no fear! In addition to our first round of airplane etiquette tips, we’re sharing five more tips for making the airplane a better place (for all of us). 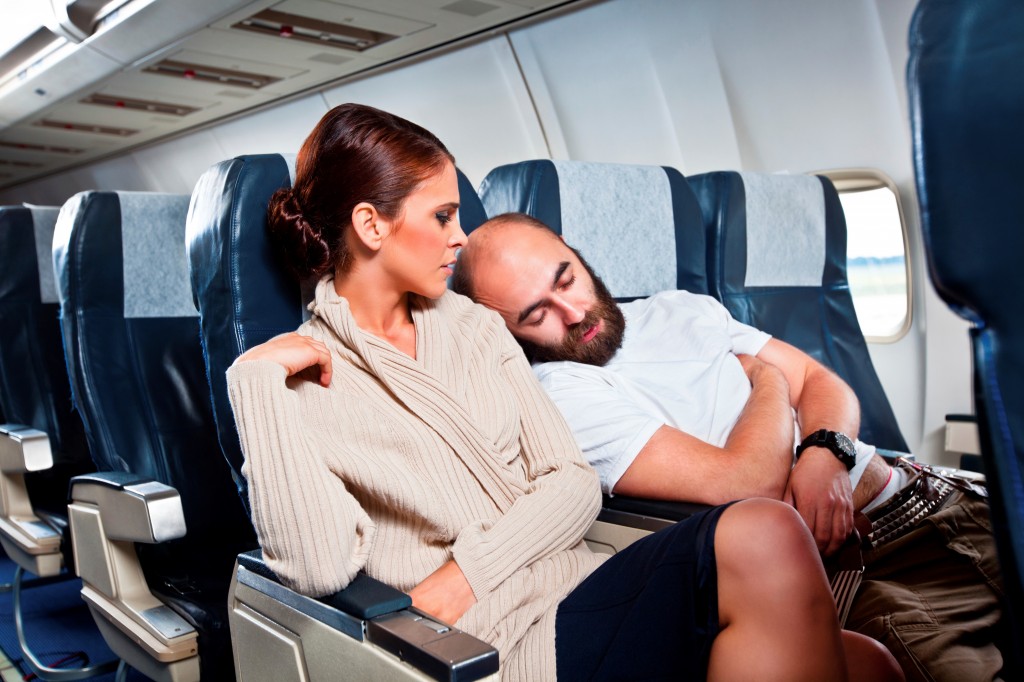 Keep your feet to yourself: Did you know the dreaded seat kicker has earned the distinction of being America’s most annoying airplane passenger? According to Expedia’s recent Airplane Etiquette Study, a whopping 61% percent of survey participants cited these people as the worst co-passengers.  Plain and simple: don’t be that person. And for those who fall prey, try to keep your cool and give the person behind you the benefit of the doubt. Chances are if it’s an adult, it will likely be a one or two-time offense as they’re trying to get comfortable. If it’s a child, simply turn around and glance at the child and the parent. The parent will likely get the hint and ask the child to stop. If they don’t, be direct and speak with the parent. If the kicking continues, find a flight attendant who can assist with the issue.

Be careful what you eat (and drink): Most airplanes are fine with passengers bringing food; but, if you decide to bring a meal or a snack, be cognizant of what you’re bringing on board. Avoid foods that have prominent smells or that could cause an upset stomach. With “aromatic passengers” ranking second in Expedia’s survey, chances are your neighbors won’t appreciate smelly breath—or the symptoms an upset stomach can bring for that matter. And if you need something to take the edge off, just remember the majority of your fellow passengers don’t want their flights to resemble Happy Hour on a cruise ship (“the boozer” actually ranked third in Expedia’s survey!). Even the most nervous fliers should take it easy and stick to one or two drinks.

Get on their good side: We’re talking about your flight attendants, of course. Yes, most travel days are long and tedious and it makes sense to want to settle in as quickly as possible…but there’s a fine line between “settling in” and being downright annoying. So before you demand a drink while the plane is still boarding or ring the assistance buzzer every five minutes, take some time to pause and reflect: if these types of behaviors would rub you the wrong way, imagine how irritating they would be to your flight attendants who deal with these behaviors day in and day out? Just remember: the golden rule still applies during air travel.

Calm those elbows: There are never ending debates about who gets the armrest, but most etiquette experts agree that the middle seat passengers (who clearly have it bad enough) have priority when it comes to using both armrests. Now that’s not say middle passengers who are feeling particularly charitable that day can’t offer up part of your armrests. For instance, if you’re the middle seat inhabitant and your neighbor happens to  need a little extra room, working out an accommodation that will make you both reasonably comfortable isn’t technically necessary, but can be viewed as a heroic act of kindness in the world of flying.

Get ahead of a weak bladder: Chances are you know if this is an issue for you by now. In a perfect world, all those with weak bladders would have first dibs on aisle seats closest to the bathrooms.  But if you’re not that lucky, a little foresight and pre-planning can go a long way. Do your best to avoid liquids (particularly with caffeine) two hours before boarding as changes in cabin pressure and tight seat belts only exacerbate symptoms.  Stuck next to a snoring neighbor? While it may be tempting to climb over them in hopes of keeping a low profile, this could end in a disaster. Instead, gently tap them and say excuse me. They may be annoyed for a moment, but it will avoid an embarrassing collision.