On 22 January, the Election Commission of Thailand announced that the general election slated for 24 February would be postponed to 24 March. The ostensible reason was that the February date interferes with the new king’s coronation ceremony plans.

This is the fifth time elections have been postponed since the National Council of Peace and Order, led by Prayuth Chan-o-cha, took control of the country after a military coup in 2014. Since then, the military has taken significant steps to entrench its power in democratic politics – jailing pro-democracy activists, controlling the media, and curbing online expression through the Computer Crimes Act. The most important step has been the amendment of the Thai Constitution in 2017, which allows for an unelected Prime Minister (PM) and the upper house or Senate to be appointed by the military brass. This is likely to ensure the military retains significant power, no matter which party forms the civilian government.

Despite an advantage to the military, political maneuverings of other main political parties/actors can add uncertainties to the electoral result. The election is expected to be a three-way race among the pro-junta Phalang Pracharat Party, the Shinawatra family (linked to the Pheu Thai Party), and the Democrat Party (which is prominent in urban areas). The Shinawatra family clan, including the ousted (2006) PM Thaksin Shinawatra, still retains a firm hold on Thai politics, especially in the northeast. The Pheu Thai party, along with two allied parties – Pheu Dharmma and Thai Raksha Chart – are the leading contenders to come out as the largest winning bloc, but not large enough to form a coalition government. With the Democrat Party unwilling to form a coalition with the Pheu Thai, the election results are unlikely to produce a clear winner, prolonging both the uncertainty and military control over democratic politics.

Any further postponement of election results may lead to protests by pro-democracy activists and political parties. These are unlikely to reach the level seen in 2014, especially because the opposition does not want to risk disqualification by the military junta rules. However, given the popular discontent with junta’s economic policies and charges of corruption, the military is running out of excuses to postpone elections indefinitely.

No party will be able to control the Government, according to NIDA poll

In February and March 2019, Nigeria is set to hold national as well as state elections where the incumbent President Muhammadu Buhari of the All Progressives Congress (APC) faces acute challenges from Atiku Abubakar of the People’s Democratic Party (PDP). The upcoming election is expected to be one of the most contested in the country’s history due to the large number of political parties (more than 50) participating. A standout feature of the February 2019 elections is also that both the leading candidates – incumbent President Muhammadu Buhari and Alhaji Atiku Abubakar – are Fulani Muslims from northern Nigeria.

Nigerian elections have a history of political violence, as witnessed in 2011 and 2015. Similarly, in the run up to the 2019 elections, a range of risk drivers could escalate tension in the country. These include:

In 2015, the Buhari government declared it had ‘defeated’ Boko Haram completely. However, there has been an increase in the number of attacks that Boko Haram and its faction, Islamic State West Africa Province (ISWAP), have perpetrated in the northeastern part of the country since 2018. Increased instances of banditry in the northwest part of Nigeria, Zamfara, and other areas have also worsened the security situation in the run-up to elections.

Heightened herder-farmer violence in the middle belt (Kwara state, Kogi state, Benue state, Taraba state, Adamawa state, etc.) has increased risks to conducting elections in this region. These parts are crucial in deciding the election’s outcome, since none of the political parties have a winning edge here. According to Crisis International, six states in Nigeria currently have a prolonged risk of violence – namely Rivers, Akwa Ibom, Kaduna, Kano, Plateau, and Adamawa.

There is also uncertainty about how the major political parties will respond after losing the national or local elections. President Buhari has pledged a peaceful and fair voting process, and all major parties signed an accord on 11 and 12 December 2018, promising peaceful campaigning and respect for the election results. However, there is an added risk of the party workers not following the accord and resorting to violence, especially in areas with heavy election losses or where the opposition has won by narrow margins.

Europe and the Central Independent States

France: Yellow Vests Protests and Their Impact on Macron’s Priorities

The government of President Emmanuel Macron has not been able to find solutions to the issues raised by the ‘Gilets Jaunes’ protests, which are now entering their eleventh week. The grassroots protests, which began on 17 November 2018 to oppose the increase in fuel prices (using yellow vests kept by French motorists), have since grown in supporters and causes.

Yellow Vest protests appear to mark a break from traditional French politics – in terms of issues, demands and leadership. This, in turn, has made the resolution of demands difficult. The movement has focused on disparate governance issues – such as rising fuel prices, the high cost of living, the greater tax burden on the working middle class, declining public services, and the government’s recent policies on education. Most protestors have been from rural or outer-urban areas (‘Peripheral France’) lacking public transport options and with a heavy reliance on cars. This group would have been disproportionately impacted by fuel taxes that were intended to encourage a lower-carbon economy. The movement has included people across ages, jobs, and regions, indicating a range of working-class families, whose average “purchasing power” has fallen by €440 a year since the 2008 crisis. Most importantly, neither the traditional left-wing trade unions nor the Catholic groups on the right are leading the protests. It has, in fact, emerged as a leaderless movement venting anger at the political and economic elite.

The repercussions of the Yellow Vest protests have been felt both in internal French politics and across the European Union. For three months, protestors have engaged in demonstrations, blocking fuel depots, engaging in vandalism, and looting shops in major cities. Spokespeople for the campaign have contradicted each other in both demands and strategic vision. There has also been a threat of radical infiltration by political extremists on both sides – right and left. This has been demonstrated by some instances of distribution of firearms, theft and damage to shops, National Front (National Rally) and other groups trying to capture the momentum, and marginal occurrences of racist and anti-immigrant acts.

The protests have weakened Macron’s agenda and standing (approval ratings are down at 23%, falling by 27% in 2018), making it difficult for the government and the protestors to reach a compromise. Further, Macron has ruled out backtracking on controversial parts of his reform agenda, such as re-imposing taxes on high earners. Despite concessions such as the rollback of the fuel tax increase and raising minimum wages, protests calling for Macron’s resignation are likely to continue.

These developments have weakened Macron’s position, forcing him to focus on internal issues at a time when Eurozone reforms and European Parliament elections need strong Franco-German leadership. The protests have also spread to other EU members, including Belgium, UK, Netherlands, Germany, and Sweden, enmeshing an anti-elite and anti-EU sentiment that could favor Eurosceptic parties in the European Parliament elections.

Impact of the U.S. Withdrawal from Syria

In a surprise announcement on December 2018, President Trump stated the United States would withdraw the 2,000 American troops stationed in Syria and give Turkey the responsibility of fighting the remainder of the Islamic State. According to analysts, this U.S. decision is likely to benefit Turkey, Iran, and the Syrian government of President Bashar al-Assad (backed by Russia and Iran), and increase Russian influence in the region. 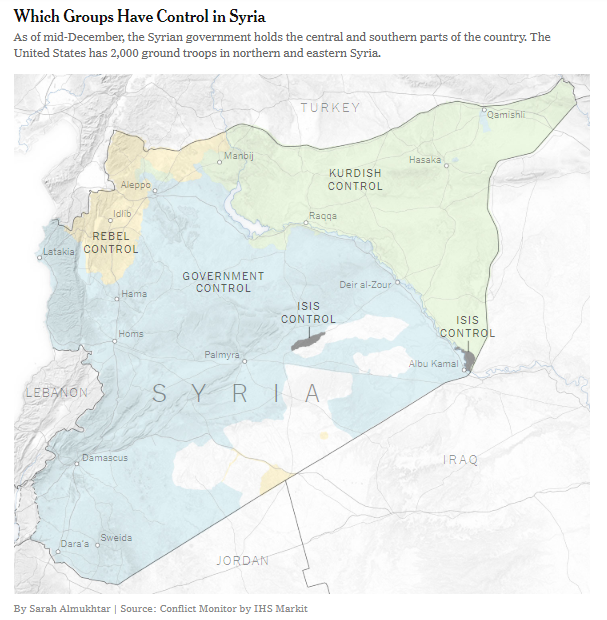 Turkey will benefit in the short term: Turkey can now take action against the Kurds, who are regarded as rebels and terrorists by Turkey, but were American allies against the Islamic State (IS). The departure of American troops from Northeastern Syria will allow Turkish forces to attack Kurdish positions in the region. However, there is a concern among the international community that the Kurds may ally with Syrian President Assad, pulling Turkey into conflict with the Russian-backed Assad regime. Further, the selling of Patriot missiles and logistical support for fighting the IS has the potential to increase Turkey’s leverage over the United States.The following are the three main areas of impact of the U.S. withdrawal from Syria:

However, it is important to highlight that the extent and timeframe for the withdrawal remain unclear, and this may cause disruption in the region and reduce America’s credibility among its allies. Although President Trump’s initial plan was to withdraw U.S. troops within 30 days, John Bolton of the NSA has said that the actual pullout will be conditional to protection assurances for its Kurdish allies. Turkey has also asked for substantial U.S. military support to eliminate the IS, including airstrikes, transport, and logistics which, if granted, may deepen U.S. involvement. The U.S. may also continue its commitment through control of the airspace over northeastern Syria and indefinite stationing of troops at the al-Tanf base situated between Tehran and Damascus.

The ‘Election Crisis’ of Venezuela – What is the Way Forward?

Venezuelan President Nicolas Maduro began his second six-year term on 10 January 2019 amid global skepticism. Over the past four weeks, Venezuela’s political situation has reached a crisis with efforts being made to unseat Maduro. The United States and twenty other countries have recognized Juan Guaido, President of the Venezuelan National Assembly, as the interim president of Venezuela. On the other hand, Greece and Ireland have called for fresh elections – not entirely supporting Guaido. Maduro still has the support of powerful allies such as China and Russia, who have condemned foreign countries’ interference in Venezuela’s internal affairs. However, amidst extensive public protests and diminishing military support for Maduro, Juan Guaido seems to have bolstered his current position.

The final decision on who will be Venezuela’s president currently lacks clarity. However, with any new president at the helm, the country’s situation is unlikely to change in the short term owing to the lack of structural changes and inability to implement stricter economic controls. Venezuela’s three major concern areas are as follows: