India, the world’s second most-populated nation after China, is projected to have one of the fastest-growing economies in the world. In fact, PricewaterhouseCoopers predicts India to nearly draw level with the United States by 2050. However, for Western travelers, doing business in India can be a bewildering experience. There are all kinds of nuances and implicit cultural norms that may not be obvious until you have an awkward cultural encounter. Fear not — if you’re headed to India, we have some advice for navigating business dealings while you’re there … minus any embarrassing faux pas.

Men: button-down shirt, trousers and a jacket or tie – in the summer months, a long-sleeved shirt with a tie is acceptable. Long cotton bottoms and kurta are also very common, but Westerners who want to wear something more comfortable usually opt for a summer suit made out of breathable fabric.

Women: The dress code for women in India has undergone significant transformation — most women used to wear traditional clothes such as saris to the office, but now, women also wear blouses, pantsuits and long skirts. Ladies, cover your knees and keep your necklines high. Avoid tight-fitting or sleeveless attire – not only is modesty important, but loose clothing is more comfortable in the tropical heat!

Itching to wear traditional Indian attire? If you’re not sure you can pull it off in a business setting, save it for a social gathering or formal event. This is always appreciated, and is often seen as a gesture of friendship and respect.

Greetings:  With its roots in Hinduism and the Caste System, India is a very hierarchical society — 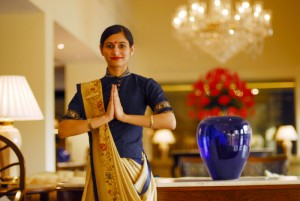 professional titles (such as Doctor, Professor) or formal titles (Mr., Mrs.) are appreciated; or, if you don’t know someone’s title, Sir or Madam will suffice. Wait to be invited before using someone’s first name.

It’s customary for two Indian people to greet by saying “Namaste” (which means, “I bow to you”) accompanied by a slight bow where the palms are pressed together and fingers pointed upward in front of the chest.  However, when an Indian meets a Westerner, a handshake may be offered instead. This probably won’t be the handshake you’re used to — keep your grip light as forceful handshakes are not acceptable in India. Traditional Indian women may shake hands with foreign women, but not usually with men. And watch where you wave, as the Western side-to-side hand wave for “hello” is frequently interpreted by Indians as “no” or “go away.” Also, business cards are always exchanged after the initial greeting and if you have the Hindi translation printed on the opposite side, you’ll really make a great impression. Note: it’s best to present and receive business cards with your right hand (the left hand is considered to be unclean in India).

Conversation: It is not uncommon for Indians to ask questions that may be viewed as overly personal or intrusive. As a result, don’t be surprised or offended if you’re asked how much you earn for a living or how much your house cost. If you’re feeling gutsy, go ahead and ask those same questions in return — rather than causing offense, they’ll be pleased you’ve taken such an interest in them! Other good conversation topics include: family, cricket, Bollywood (India’s film industry) and India’s economic reforms. Food is also an excellent topic, but you may want to find out if your associate is vegetarian before getting into discussions about your summer BBQ favorites. Avoid talking about Pakistan and the large rich-poor divide that exists in India.

Additional conversation tips: Learn some key Hindi words and watch your feet! To point at someone with your foot (feet are considered unclean) or to show the bottom of your foot is considered offensive. Apologize immediately if you accidentally touch another with your feet or shoes. Also, sustained eye contact is generally not the norm, especially a woman looking at a man.

Dining: Indians take great pride in hosting guests, and it is very common to be invited to the home 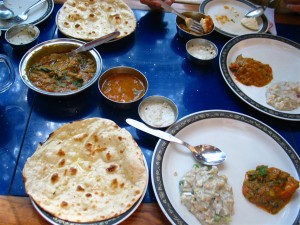 of an Indian business contact. Allow your hosts to serve you. Never refuse food, but don’t feel obligated to empty your plate. Meals are generally not good times to discuss business or make decisions, but let your associates take the lead: if they bring up business, then it’s okay to discuss it. Flexibility in trying all types of Indian food (get ready for some heat!) is always appreciated. While it is perfectly acceptable to choose a non-vegetarian dish even if your host chooses vegetarian, keep in mind that Hindus don’t eat beef and Muslims don’t eat pork (also, many Muslims and Hindus don’t drink alcohol either). If you really want to impress, go with their lead. And sorry left-handers … eating with your right hand is the way to go in India!

Tips on Tipping: In most restaurants, 10% is sufficient (if there is no service charge), but feel free to leave more for exceptional service.

Gifts: Gifts are not normally expected at the first meeting, but may be given once a relationship develops. Some acceptable gifts include: chocolates, flowers (no frangipani or white flowers, they are for funerals) and specialty gifts from the U.S.  Gifts are usually not opened in the presence of the giver. If you’re going to dinner at a host’s house, bring a gift for the host and the host’s children.

Negotiations: Arrive at meetings on time, even though you may be kept waiting. Meetings usually begin with a fair amount of “small talk” and relationship-building time. Avoid hard sell, pressure tactics or any type of confrontation as Indians value peace and harmony. Decisions are slow and are always made by the most senior person. Plan on several visits before you reach an agreement — patience and polite persistence is key. Also, Indians tend to be very indirect and don’t like saying no, so expect to hear a lot of “maybes,” at least at first. And this should save you some confusion: when an Indian smiles and jerks his/her head backward — a gesture that looks like a western ‘no’ — or moves his/her head in a figure 8, this actually means “yes.”

Do you have any other business etiquette tips you’d like to share about India? Let us know in the comments below, we’d love to hear from you!